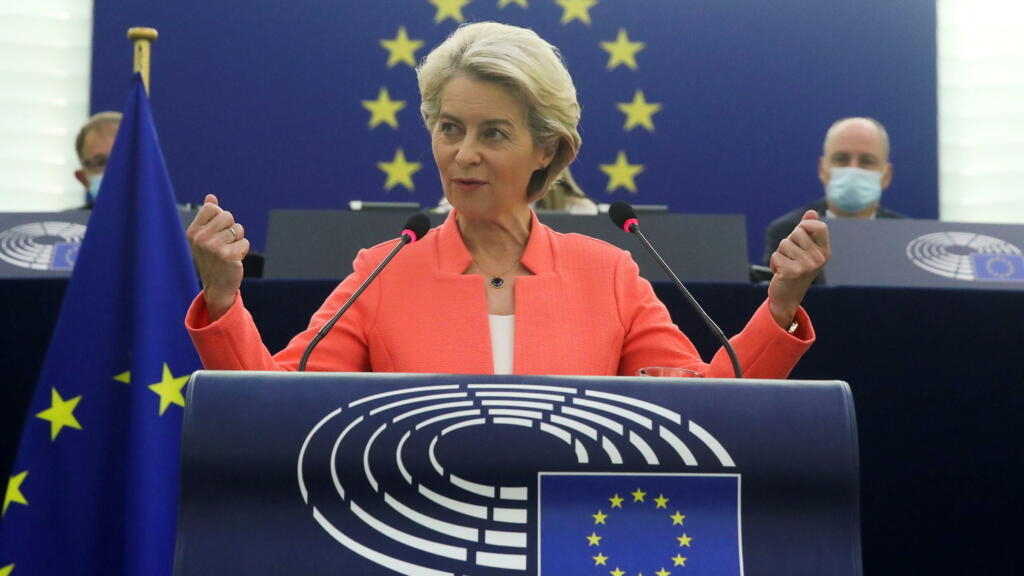 The European Union’s chief executive Ursula von der Leyen pledged to accelerate the rate of Covid-19 vaccinations around the world, offering another 200 million jabs for low-income countries in her annual State of the European Union speech on Wednesday.

“Our first and most urgent priority is to speed up global vaccination,” von der Leyen told the European Parliament in Strasbourg. “We have already committed to share 250 million doses of vaccine. I can announce today that our mission will add a new donation of another 200 million doses until the middle of next year,” she said.

Speaking to lawmakers in the eastern French city of Strasbourg, von der Leyen hailed the EU’s vaccination drive. With 70 percent of its adult population fully vaccinated so far, the bloc is now among the world’s leaders in its pandemic response.

Looking forward, von der Leyen said the next year will be “a test of character” for the EU. “A pandemic is a marathon, it’s not a sprint,” she noted. “Let us make sure that it does not turn into a pandemic of the non-vaccinated.”

The 2021 State of the European Union speech

The former German defence minister has put tackling climate change at the top of her agenda with bold steps for the EU to achieve climate neutrality by 2050, along with a digital transformation of its economy.

Von der Leyen said the EU would double its international funding to protect nature and halt the decline of the world’s biodiversity, adding: “My message today is that Europe is ready to do more.”

“This is a generation with a conscience, they are pushing us to go further and faster to tackle the climate crisis,” she said.

She said the EU would increase its financial support to help poorer countries fight climate change and adapt to its impacts.

“We will now propose an additional €4 billion for climate finance until 2027,” said von der Leyen before calling on the EU’s allies to step up their commitments on tackling climate change.

“We expect the United States and our partners to step up too. This is vital, because closing the climate finance gap together, the US and the European Union, would be such a strong signal for global climate leadership,” she said.

Climate finance is expected to be a decisive issue at the UN’s COP26 summit in November, where world leaders will attempt to unlock commitments to cut emissions faster and stave off catastrophic climate change.

With seven weeks to go until COP26, finance remains a sore point.

Rich countries have so far failed to deliver their 2009 pledge to provide $100 billion per year in climate finance to poorer countries by 2020.

Without that support, some developing nations say they cannot make the huge investments required to wean their economies off fossil fuels and onto clean energy, or bolster their infrastructure to cope with worsening storms, floods and rising sea levels.

The EU and its member countries are, taken together, the biggest provider of climate finance to developing countries, according to the OECD.

On the foreign policy front, von der Leyen said the EU would hold a defence summit next year during France’s rotating presidency of the bloc to push for a more autonomous military capacity.

The humanitarian and security fallout of the US withdrawal from Afghanistan has intensified debate in Brussels’ about the EU’s global security role.

“It is time for Europe to step up to the next level,” said von der Leyen, adding that she will co-host the upcoming defence summit with French President Emmanuel Macron.

Macron is expected to push for member states to commit to more defence coordination.

But most EU nations are also members of the NATO alliance and some, particularly eastern states more exposed to the threat of Russia, do not want to undermine ties with the US.

“Witnessing events unfold in Afghanistan was profoundly painful for the families and friends of fallen servicemen and servicewomen,” von der Leyen said.

“We have to reflect on how this mission could end so abruptly. There are deeply troubling questions that allies will have to tackle within NATO,” she said. “But there’s simply no security and defence issue where less cooperation is the answer.”

Von der Leyen vowed to work with NATO Secretary General Jens Stoltenberg on a new EU-NATO joint declaration to be presented before the end of the year.

“But this is only one part of the equation,” she said. “Europe can and clearly should be able and willing to do more on its own.”

With a global chip shortage causing a major delay in manufacturing activity and forcing several automakers to cut down on production, von der Leyen said the bloc must create a state- of-the-art European chip ecosystem including production.

“Digital is the make-or-break issue,” she said. “We will present a new European Chips Act. The aim is to jointly create a state-of-the-art European chip ecosystem, including production. That ensures our security of supply and will develop new markets for ground-breaking European tech.”

A shortage of semi-conductors has posed one of the biggest risks to the EU’s rebound from the effects of the Covid-19 pandemic. The Commission last year unveiled plans to invest a fifth of its €750-billion pandemic recovery fund in digital projects.

From smartphones to trains or entire smart factories, semi-conductors make everything work.

But we depend on state-of-the-art chips manufactured in Asia.

We will present a new European Chips Act.

Von der Leyen lamented the EU’s reliance on Asian-made chips and its diminished share in the supply chain, from design to manufacturing capacity.

However, hurdles to building up Europe’s chip capability include getting access to rare earth minerals outside the bloc and reluctance by companies to make hefty investments unless they can run the plants at full capacity to boost their return.

(FRANCE 24 with AFP and REUTERS)

Pope jokes ‘some wanted me dead’ after surgery: Report