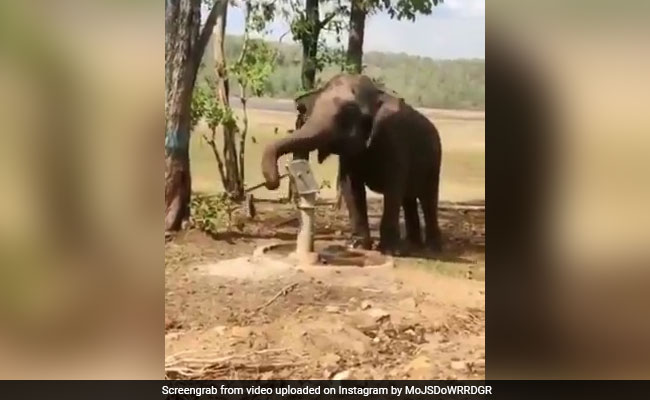 An elephant operates a hand pump in this video.

The Ministry of Jal Shakti has shared a video that highlights the importance of water conservation. The video showed an adult elephant working a hand pump to get its share of drinking water, possibly because it could not find a natural source like a lake or pond nearby when it was thirsty. That struggle made it realise the importance of every drop of water and it pumped only so much water which would be sufficient to quench its thirst. The video showed the jumbo using its trunk to collect water accumulated on the ground to drink.

Through the video, the ministry’s message was clear: conserve water or be prepared to struggle to find a natural freshwater source. The elephant did not pump more water than it needed, the video showed, unlike some who leave the tap open and unattended.

“Even an elephant understands the importance of every drop of water. Then why do we humans waste this invaluable resource,” the ministry asks in Hindi, urging people to learn from the elephant and start conserving water. The post has garnered more than 17,000 views so far.

A Twitter user, who appeared disappointed by the wastage of water, suggested animals were more intelligent than humans.

Water covers 70 percent of the Earth and yet there is not enough freshwater – the stuff we drink, bathe and irrigate our fields with. Only 3 percent of the world’s water is freshwater and two-thirds of that is frozen glaciers, meaning unavailable for use. The neighbourhood reservoirs are drying up because of uneven weather patterns as a result of climate change.

The Ministry Of Jal Shakti was established in 2019 with an aim to provide clean drinking water as well as address the county’s water problems.