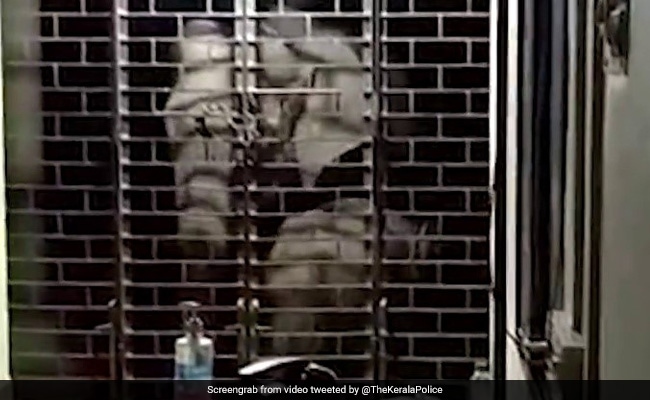 A mother elephant and her calf were seen at a police station in Kerala.,

Kerala has a massive population of elephants. While these pachyderms are often celebrated as an important part of the state’s tourism, they cause some trouble too. For instance, elephant attacks often trouble the locals of the region. In a recent Twitter post, Kerala Police showed us how an elephant duo tried to barge into a police station. The video shows a mother elephant and her calf trying to push against an iron grill gate at the Parambikulam police station. The clip is captioned in Malayalam, “Watch the video to know what the mother and child did when they reached the Parambikulam police station.”

But, the video isn’t a regular one. Kerala Police, who is known for its peppy social media presence, added a twist to the footage. They juxtaposed dialogues and music from popular Malayalam movies to add fun to the clips. When the elephant tries to break the gate, we hear the words “Satheerthyo” from the film Kuberan. Then, we hear a score from the movie Manichithrathazhu. Another dialogue follows it as if asking the elephant its name.

The video was posted on January 2 and has received over 3,000 views. Take a look:

A user commented, “The poor thing must have come to complain.”

Another suggested that the elephant might have arrived with a case at the police station.

Elephant encounters are not exclusive to Kerala, of course. Recently, an elephant attacked a man in Assam. A 14-second clip went viral when it showed a man being dragged by an elephant across an agricultural field. The elephant chased the man and charged at him while he was ploughing the land. Onlookers tried to shoo away the wild elephant. Read more about it here.

However, many of these elephant attacks are the result of human encroachments on elephant corridors. In such cases, human-constructed barricades and fences also fail to stop the wild creatures from entering certain regions. A viral video once showed how an elephant easily jumped over a fence in order to continue its journey through the forest.