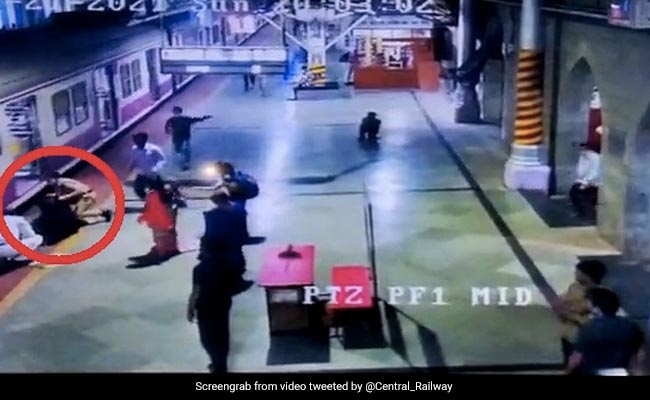 A Railway Protection Force (RPF) constable acted swiftly to save a woman who slipped and fell while trying to board a moving train in Mumbai. Police constable Sapna Golkar was on duty at Mumbai’s Byculla railway station on Sunday night when she saw the commuter lose her balance and fall. Footage shows the alert cop immediately rushing to the woman’s aid and pulling her away from the moving train, thereby preventing further injuries. This is the second time in two months that Ms Golkar has saved a passenger

In the video, the 40-year-old woman was dragged by the train for a split second before help arrived. Besides Constable Golkar, a few other people at the platform also rushed to her aid. The commuter, who fell while trying to board a Mumbai local train, was seen getting up after a few moments, apparently not injured seriously.

The video was released on social media by Central Railway yesterday and also shared by the Ministry of Railways today on Twitter. “Commendable work done,” the official Twitter account of Central Railways wrote in praise of the constable.

The Ministry of Railways, meanwhile, reminded all passengers to not attempt to board trains while they are moving. “You are requested not to attempt to board or alight a moving vehicle, it can be fatal,” the ministry wrote in Hindi.

The video has earned Ms Golkar much praise on the microblogging platform.

“Top class display of alertness and proactiveness shown by the officer,” another said.

This is the second time Ms Golkar has been credited for saving a life. Just last month, the RPF constable saved the life of a 50-year-old woman after she slipped while boarding a moving train at Sandherst station.

Watch: Shreyas Iyer Has All The Right Moves, Both On And Off The Field

‘People trying to frame me like they framed Anil Deshmukh’: Nawab Malik

It is incumbent upon judges to exercise utmost discretion in utterances in courtrooms: Kovind

Free speech not to be exercised only if in line with majority: Delhi HC