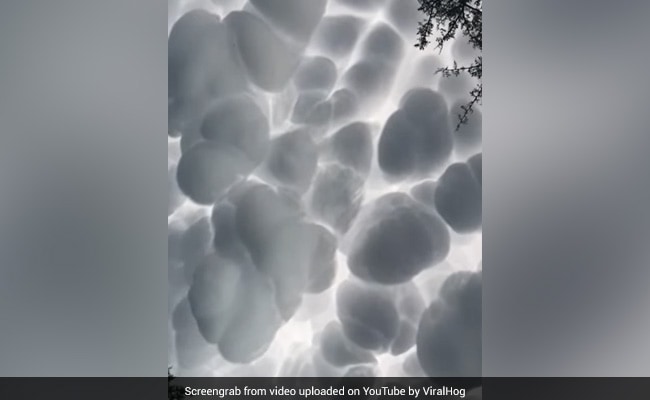 An overcast sky recently stunned a few residents in Argentina with its strangeness and sheer beauty. A viral video shows a sky covered with clouds that look like cotton balls hanging in the air. These unusual type of clouds are known as Mammatus clouds. They occurred over Casa Grande, Córdoba on November 13, 2021.

Mammatus clouds refer to distinctive cloud formations that are set apart by a bunch of protrusions or bulges emerging from the base of another cloud. These clouds are usually formed at the base of large cumulonimbus clouds and are associated with thunderstorms. The presence of mammatus clouds often indicates the arrival of heavy rain, lightning and even hailstorms.

The clip was uploaded on YouTube with a caption that read, “Late Saturday afternoon the sky was covered with these unusual clouds that made us feel as if we were trapped in a vivarium, then came the strong storm with lightning, winds, and hail. We were lucky to have been there to capture this strange phenomenon, which may be a product of weather manipulation.”

On YouTube, the video has been viewed more than 10,000 times.

Viewers were amazed at such a mesmerising sight. “Those are the prettiest clouds I have ever seen,” a user commented. Some called them, “Marshmallow clouds”.

A person wrote with humour, “Wait? So you are telling me that’s not cotton and you didn’t shrink yourself down to fit in that miniature forest?”

“That’s so freaky, I’d be staring at it all day if I could,” read one of the reactions.

This person wrote, “This looks like it could be from another planet.”

A seemingly enthusiastic cloud watcher said, “These and asperatus clouds give me the heebee jeebies.”

A user couldn’t help but write, “This is beautiful. We truly live in paradise.”

Unusual cloud formations often leave spectators baffled. Once, a photo of wave-shaped clouds broke the Internet. These clouds appeared over Virginia’s Lake Smith Mountain. The photo showed the rare clouds soaring above green fields. A viewer clarified that these types of clouds are known as Kelvin-Helmholtz clouds. The person wrote, “I sent the photo to our local news station and the meteorologist replied to me saying they are very rare and usually not this defined.”