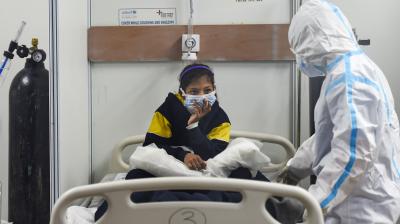 According to the latest government data, only 420 (4.65 per cent) of the 9,029 beds in Delhi hospitals are occupied

New Delhi: The Delhi government on Tuesday decided to impose a weekend curfew in the national capital in view of the surge in Covid-19 cases driven by the fast-spreading Omicron variant. All government employees, barring those engaged in essential services, have been asked to work from home.

Private offices can, however, function with only 50 per cent capacity. The government has also allowed buses and Metro trains to operate with full capacity, instead of the 50 per cent announced earlier, to prevent any overcrowding at bus depots and outside Metro stations.

Delhi deputy chief minister Manish Sisodia said there will be a Covid-19 curfew on Saturdays and Sundays. Private offices will be allowed to work with 50 per cent capacity while all government officials, barring essential services’ personnel, will work from home, Mr Sisodia told the media. The weekend curfew will begin from 10 pm on Friday and remain in effect till 5 am on Monday.

He further said that buses and Metro trains in Delhi will run at 100 per cent capacity to avoid crowding at Metro stations or bus stops. People without masks will not be allowed to enter any public transport in Delhi.

The weekend curfew was being imposed due to the rising Covid-19 cases, and should not be considered a lockdown, health minister Satyendra Jain said.

It was officially clarified that the curfew restrictions would not apply to shops and establishments dealing with essential goods — medicines, groceries, vegetables, fruits, milk, meat, etc. Also, services such as healthcare, water, power distribution, the media and transport would not be impacted.

The delivery of essential services, including the supply of food and medicines, will continue uninterrupted.

The Delhi government has also issued an action plan for smooth running and real-time monitoring of oxygen supply in the city. Telemetry devices are being installed at oxygen tanks in 53 government-run and private hospitals. Live monitoring will be done through the government’s Covid War Room.

On Tuesday, the Delhi Disaster Management Authority (DDMA) held a meeting to decide on the fresh restrictions in the national capital as the positivity rate stayed above five per cent for two consecutive days.

The deputy CM said cases of the Omicron variant were rapidly going up. Delhi has reported around 11,000 positive cases in the past 8-10 days, of which around 350 patients are in hospital. Only 124 patients, however, needed oxygen and seven were on a ventilator, he added.

The night curfew from 10 pm to 5 am daily will remain in place. Delhi government officials said the national capital might see 20,000-25,000 cases per day by mid-January, and hospitalisation cases may also shoot up by next week.

As costs mount, how long can China stick with ‘zero COVID’?