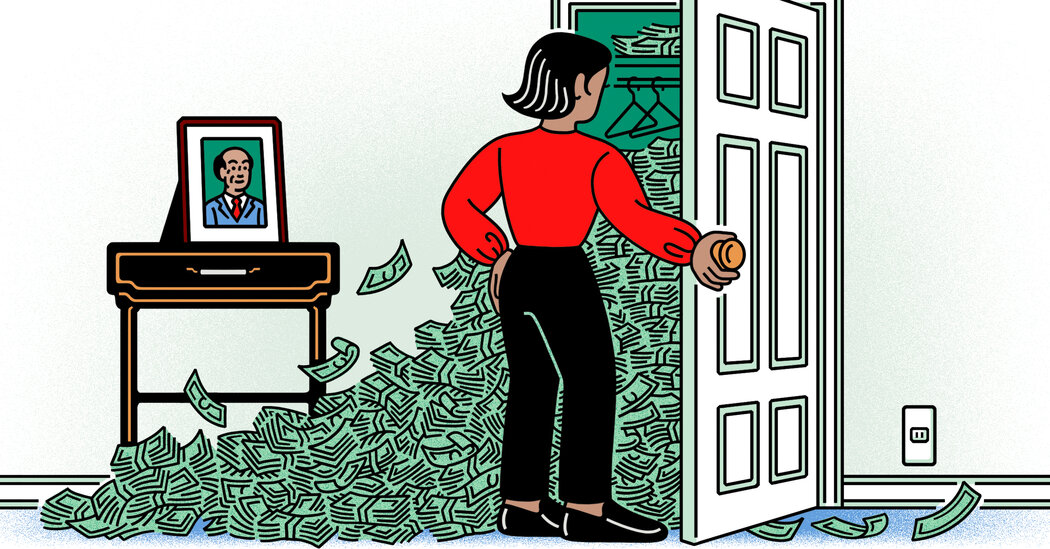 In an effort to provide for the long-term financial stability of her children, my grandmother bought a large amount of stock in a fossil-fuel company, which she left to my father. I find it heartbreaking that the investment she made and that my father has maintained to provide safety and security is one of the things that is actively moving the planet toward terrible destruction. My father is elderly and would not consider divesting from this company. This stock will be a majority of his bequest to my siblings and me. I hope my father will live for many more years, but when that stock — and the associated wealth — come to me, what is the ethical thing for me to do with the money? I feel guilt and disgust at the prospect of profiting off the suffering of so many. Name Withheld

The case for divesting from fossil-fuel companies is that such divestment, on a large scale, would stigmatize their activities, exert a downward pressure on their share prices and (through an indirect mechanism of action) reduce the amount of capital available to them. We want to restrain investment in the exploitation of fossil fuels; we want to encourage investment in alternatives. But some people are motivated less by considerations of capital flows and more by a desire to have clean hands — to feel unsullied by the fossil-fuel industry and its grievous legacy.

There are a few complications here. One is that most oil reserves are state-owned and aren’t directly affected by divestment campaigns, so the strategy is quite limited in its effects. Another is that the world currently relies on fossil fuels for most of its energy needs, including most of its electricity, and though we should decarbonize as fast as we can (which is much faster than oil-and-gas companies would like), there’s no switch we can throw that would obviate a period of transition: Oil companies can’t yet be wished out of existence.

Then there’s the question of how to think about socially responsible shareholder activists. The hedge fund Engine No. 1, by becoming an Exxon Mobil shareholder and corralling the support of much larger investors, succeeded in installing three directors committed to getting the company to spend more on carbon reduction. Can investors who are devoted to E.S.G. (environment, social and governance) issues play a positive role in reforming the energy sector?

If you’re simply concerned with keeping your hands clean, you won’t be able to explore these matters. The great economic and political theorist Albert O. Hirschman explored “exit” and “voice” as among the ways we can respond to dysfunctional organizations. Exit, in this case, means withdrawing from these entities; voice means speaking up and trying to redirect them. Some combination of exit and voice might be optimal here.

And when the stock passes into your possession? I would recommend a forward-looking approach: The question is what you can do that would contribute to solving one of the great problems facing humanity. That might mean liquidating your holdings and adding to the social pressure on the company. It might also mean donating some of the money to a nonprofit group that works for a greener world; it might mean putting resources into the alternative-energy sector.

Your father, out of sentimentality, won’t consider divesting from this company. He’s caught up, it seems, in the fact that his mother made the investment — a backward-looking consideration. Don’t get caught up in backward-looking considerations, too. To dwell on the fact that this wealth came from an investment made by someone else a few generations ago is another form of sentimentality. Almost any inheritance entails profiting from the sins of the past. An awareness of historical mistakes is salutary, but the task is to help put things right in the future.

Kwame Anthony Appiah teaches philosophy at N.Y.U. His books include “Cosmopolitanism,” “The Honor Code” and “The Lies That Bind: Rethinking Identity.” To submit a query: Send an email to [email protected]; or send mail to The Ethicist, The New York Times Magazine, 620 Eighth Avenue, New York, N.Y. 10018. (Include a daytime phone number.)

Why Do Christmas Trees Cost More This Year?

No Credit Score? No Problem! Just Hand Over More Data.

Dowry continues to be a social evil, legislature needs to step in: SC