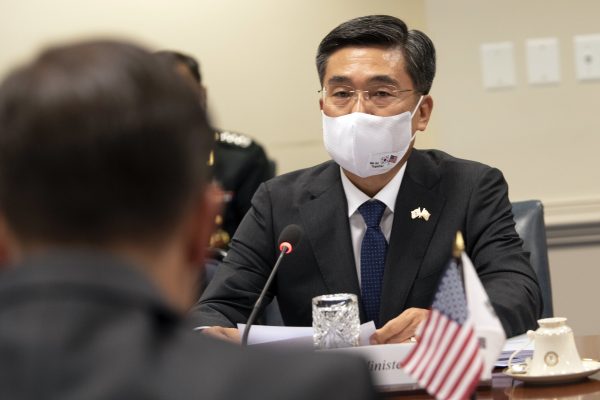 Late last month, South Korea’s defense minister laid out Seoul’s security vision for Southeast Asia during a trip to the region. The vision spotlighted South Korea’s evolving defense thinking within its broader approach to Southeast Asia and the Indo-Pacific amid the wider mix of domestic, regional, and global developments.

From the outset of his term in office, South Korean President Moon Jae-in has looked to reinvigorate his country’s ties with Southeast Asia through his New Southern Policy (NSP), unveiled in 2017, which has  focuses on people, prosperity, and peace. As I’ve observed previously, as the NSP has evolved, South Korea has attempted to build on some existing components of ASEAN-ROK security cooperation, including defense exchanges and joint responses to challenges such as cyber and maritime security.

That increased emphasis on the defense realm has continued over the past year or so. South Korea has been building out the defense aspect of the New Southern Policy Plus (NSP Plus), unveiled at the ASEAN-ROK Summit in November 2020, which included a focus on non-traditional security and transnational challenges. And at the inaugural ASEAN-ROK Informal Defense Ministers’ meeting in November 2021 – itself a manifestation of the increased focus on the security domain within ties – Seoul rolled out a new action plan for advancing the defense aspect of its ties with ASEAN as a grouping over the next few years.

Last month, Seoul’s diplomacy was in the spotlight again with the visit of Defense Minister Suh Wook to Singapore and Thailand, two key partners for the New Southern Policy. Both of these visits highlighted Seoul’s defense vision for the region as well as some of the ongoing activity in its individual bilateral relationships.

Get briefed on the story of the week, and developing stories to watch across the Asia-Pacific.

Suh Wook’s trip consisted of a series of interactions. During his three-day visit to Thailand, he visited the Fourth Wing of the Royal Thai Air Force, which operates the T-50TH jets from South Korea, and had a meeting with Prime Minister Prayut Chan-o-cha in which the pair discussed expanding cooperation in areas such as defense industry and military medicine. And on his Singapore stop, per Singapore’s defense ministry, he visited the Singapore Navy’s Information Fusion Center and explored the possibility of strengthening collaboration with Defense Minister Ng Eng Hen, including in humanitarian assistance and disaster relief, cybersecurity, and chemical, biological, radiological, nuclear, and explosives defense.

Yet the highlight of Suh’s visit was the delivery of a lecture at a Singapore think tank, where he laid out South Korea’s defense vision for the region. During the lecture, which was a hybrid event that took place at the S. Rajaratnam School of International Studies, he noted that South Korea would look to build out its defense diplomacy in Southeast Asia by focusing on existing institutions and needs, be it through working groups of multilateral institutions like the ASEAN Defense Ministers Meeting-Plus (ADMM-Plus), partnerships across countries on non-traditional security issues and combined exercises, or indigenous ASEAN initiatives such as the ASEAN Outlook on the Indo-Pacific (AOIP). He also framed the logic of ASEAN-ROK ties within a broader regional perspective, noting that cooperation among middle and smaller powers could not only help manage challenges but also potentially buffer growing U.S.-China rivalry.

While much of what Suh touched on was in line with what South Korea is already doing, it was not without significance. Perceptions-wise, laying out this vision is itself a welcome move in Southeast Asia where, for all of South Korea’s defense activities, Seoul is still seen even in some elite surveys as a partner to engage with on select areas such as 5G, rather than a strategic security partner writ large in the context of U.S.-China competition. More substantively, Suh’s positioning of Seoul as a country supporting multilateralism and AOIP principles like inclusivity will be welcome in some regional circles where there is lingering nervousness about minilateral institutions such as the Quadrilateral Security Dialogue (Quad) and the Australia-U.K.-U.S. (AUKUS) security mechanism, either because they are seen as exacerbating U.S.-China rivalry or undermining ASEAN centrality in the regional architecture.

To be sure, Suh’s remarks did not touch on all the lingering questions and potential challenges for Seoul’s regional defense vision. Some of that has to do with regional realities, including the sensitivities of branding certain bilateral projects under a regional umbrella relative to other dialogue partners such as Japan and Australia or the difficulties in gaining sustained traction from select Southeast Asian states on individual cooperative endeavors, as evidenced by the joint fighter jet program with Indonesia. Domestic factors are also an issue in 2022, with South Korea’s presidential elections naturally raising the issue of the extent to which the NSP vision will be sustained. There are also the potential disruptions of regional flashpoints including the South China Sea and North Korea, the latter of which unsurprisingly featured prominently in Suh’s remarks.

Nonetheless, Suh’s trip and his speech showcased South Korea’s continued commitment in building out the defense aspect of its vision for its relations with Southeast Asia and ASEAN amid this mix of opportunities and challenges. As such, how that vision translates into reality in the coming months and years will no doubt be closely watched by regional observers in Southeast Asia as well as in other capitals in the wider Indo-Pacific region.