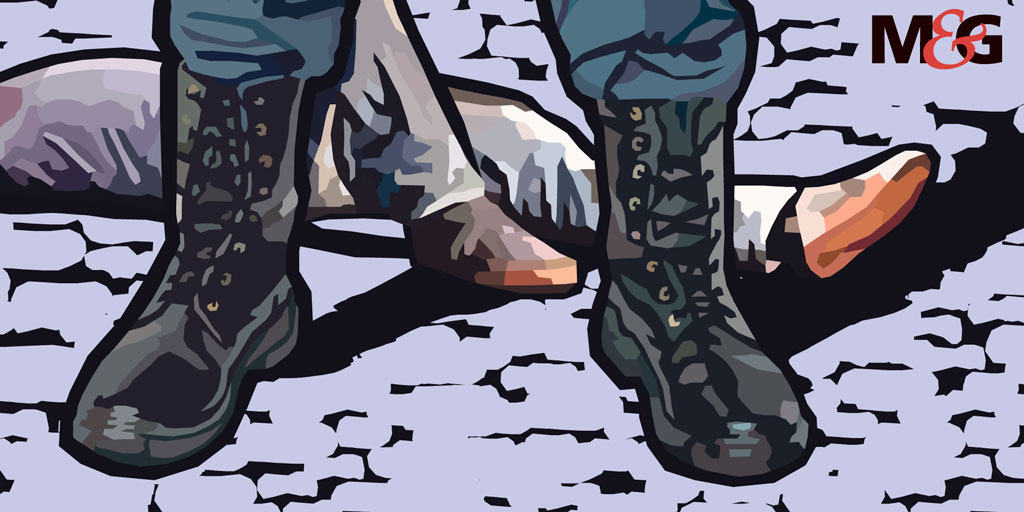 When one of the hundreds of yearly killings eventually makes the news — more than one each day — some of us flare up in anger and tears. Some ask: Ten years after Andries Tatane, nine years after Marikana, has anything changed? This is the wrong question to ask, because it assumes that we should expect anything to be different.

The transition from apartheid to neoliberalism was endorsed and brokered by corporate capital, allowing capitalists to make their profits but lose their stigma. Apartheid lives on anew, now palatable to global liberalism, and we can see that in policing. Instead, we should ask: is policing as a whole any good?

The story of the police is that they are heroes who protect and serve. The fastest way to end that fabrication is to ask what and who exactly they protect and serve in practice, and who in turn is bullied and brutalised.

Everywhere, overall, the police protect the current order. From their creation during colonisation to now, police have served the wealthy against the many, and the white against the rest. In the US, we have seen large-scale mass resistance and outrage against police violence, and yet the situation here is much worse. The lowest independent estimate I have found claims that the South African Police Service kills almost two-and-a-half times more people than US police.

You know someone who has been raped by them. Ask any land, housing, or mining activist about their experiences with police, and you will start to see a horrid reality. Despite this, as anti-capitalists, our programmes generally do not include principled resistance to policing.

Like the wall of a dam, police are the physical force preventing the redistribution of resources of this land to the people. It is the police who demolish homes and evict poor masses from stolen land when occupiers try to unsteal it. It is the police who, just by doing their job, support the bosses when overstretched workers demand a decent life, dooming workers’ children to that same poverty.

Policing does not solve the issue of crime. More than anything, it is part of the mechanisms that create crime, by maintaining the private property relations that uphold our unequal society and enforcing the everyday criminalisation of poor people trying to improve their lives. The harms of policing are not aberrations from the norm. They are what policing is and has always been, because of its systemic function. And therefore it is unfixable. Prisons, too, are a harmful, abject failure.

Marikana should never have happened because if this were not a colonial nation, no miner would have to strike for a measly R12 500. The human reality is that nobody with a full stomach and a roof over their head for themselves and their loved ones would ever go down into those mines. Those mines are built on extreme exploitation, and while they live, so does colonialism. Among other things, it is the police, standing there, holding it together.

My brief experience in reformist circles is one of people doing earnest work — but with an underlying anxiety. They notice that their solutions are indefinitely postponed, their actions providing only token prosecutions, minimal reforms, and other half-measures that may at best give the appearance of change, and only occasionally do something about the worst abuses.

In practice, these changes amount to the minimum needed for the whole machinery of the state and capitalism to continue to lubricate its gears with the blood of the marginalised.

At the end of apartheid, there were reforms that came at great financial cost — the police were demilitarised, retrained, and democratised to a significant extent. But all it took was one or two authoritarians in powerful positions to unmake that progress.

After Marikana, we saw commissions and panels of experts deliberating and making official recommendations, and then engaging police on those recommendations up until today, nine years later. They will go nowhere — they are as likely as real redistribution of resources under capitalism, because they are part of the same problem.

Reformists do not take into account the overwhelming depth and cost of the changes they want. For the people that our society values so little, it will not provide them the R12 500 they need.

Our police accountability agency, the Independent Police Investigative Directorate, has been shown repeatedly by journalist group Viewfinder to be systemically useless. It is largely ignored by the police themselves, even when it does make findings against them.

Like all purely reformist approaches, in practice this agency only uses up and diverts people’s energy and hope for change in a dead end that they have no real say in. This gives some the false impression that there is police accountability. How many years has it been since Marikana was captured on video, and has a single one of those murderers and those who gave the orders been held accountable? Even less so for less famous cases.

So it is reformism — rather than abolition — that is really unrealistic or “utopian.”

The twin harms of law and police: let’s decriminalise and defund. Instead of reformist reforms intended to capacitate police, we can limit advocacy to radical reforms, which reduce their capacity to harm. Defunding is not just the removal of police funding; it is the diverting of funding from policing to actual social goods such as housing, food security, healthcare, and education. These can help everyone and avoid the reproduction of the conditions that make people feel we need police.

Together with that, we should start with the decriminalisation of poverty generally, and the removal of the harmful socioeconomic effect of related harassment, fines, and imprisonment of the marginalised. In this way, we can begin the path to completely changing the way that we relate to accountability. The African Commission for Human and People’s Rights has already adopted principles towards decriminalising petty offences — you and your organisations can go beyond that.

In terms of delegitimising: police are not on the side of workers or the marginalised. Police are “workers” who have chosen to base their livelihoods on the current order. Their jobs depend on defending capital and the ways of thinking that reproduce capitalism, so policing will tend to attract people who are willing to do that. Needing a salary is no excuse for evicting poor families, shooting rubber bullets at students who seek a better life for all, or abusing undocumented migrants. As long as they do their job, they cannot be our allies.

Police unions in practice tend to defend some of the worst cops and abuses, while pushing for more money and less accountability. It is for us to denounce the whole institution of police, reject their unions, and demoralise individual officers so that they can leave the force and find themselves on the side of liberation.

These demands are not only for our sake: if South African police are anything like their siblings overseas, compared to other sectors, they have high rates of child abuse and domestic violence and are more likely to commit suicide or suffer from addiction.

Unlike other places, there has not yet been a comprehensive blueprint built for an abolitionist  programme in South Africa, but we do have precedents. My generation hears some of our elders tell stories of how, during apartheid, people organised to push police out of the townships. Many people formed street committees and community groups and student councils to do the work of arranging community safety without police. We can draw from that history — now lost on much of the youth — and improve upon it, as one essential part of our broader anti-capitalist struggle.

Once we recognise that relations of policing are part of the society we wish to change, we must ourselves avoid becoming like police or prison guards. Instead, we must foster organised and strong communities which can deal with their own problems in a human way. The power we hold in our communities and movements cannot be taken away simply when officials are corrupt, laws are changed, or state budgets are cut.

We cannot say exactly what this process would look like in our most unequal society yet. But we can learn from the past, and we can learn from abolitionists across the globe. It is for us to explore what is possible and make it together.

This article was first published on Africa is a Country