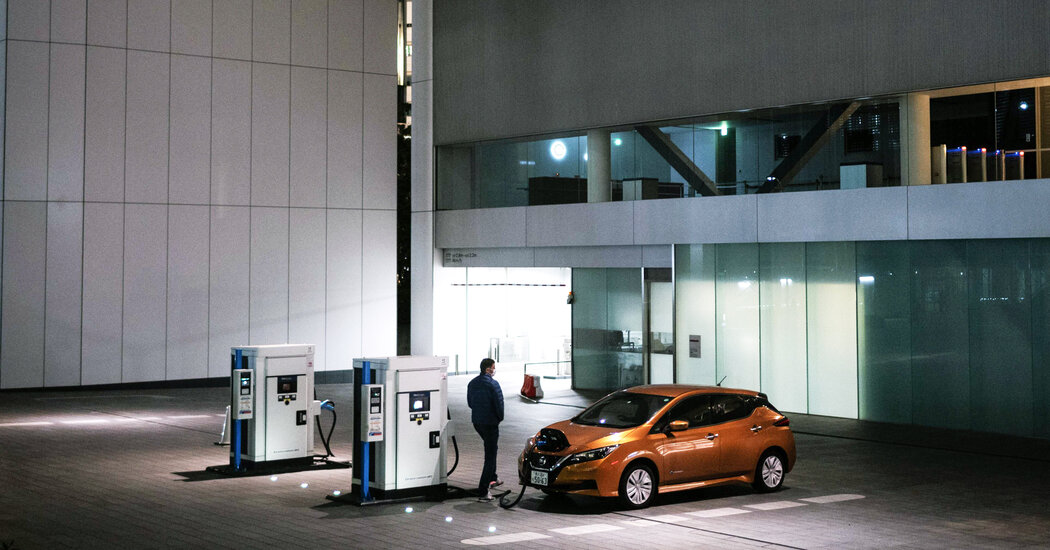 TOKYO — Just over a decade ago, Nissan became the first automaker to offer a mass-produced car that ran on batteries alone. That hatchback, the Leaf, has been a smash hit, at least by electric car standards, with more than 500,000 sold by the end of last year.

But as the trail that Nissan blazed becomes increasingly crowded, Japan’s mighty auto industry is in danger of being left behind. While governments and automakers worldwide are staking out bold pledges to transition to electric-only vehicles, Japanese car companies and regulators are hedging their bets.

Japan dominates the global market for the current generation of climate-friendly vehicles — gasoline-electric hybrids — and hopes to leverage its huge investment in the technology for as long as possible. That short-term focus, however, leaves the country’s most important industry at risk of missing a transformative moment, said Masato Inoue, the original Leaf’s lead designer.

“When disruption happens, there’s always fear,” said Mr. Inoue, who retired from Nissan in 2014. But ready or not, he added, “a big wave of electric vehicles is really coming.”

For now, it’s a mere ripple. Electric cars make up less than 3 percent of global sales, with many buyers balking at their higher costs, limited range and long charging times. Turning a profit on the cars, with the exception of some luxury models, isn’t easy.

Still, the race toward an all-electric future, long led by Tesla, has accelerated and expanded this year. In January, General Motors became the first major automaker to declare that it would eliminate all tailpipe emissions from its cars, vowing to do so by 2035. Last week, Volvo moved to outdo its larger competitors by pledging to go electric-only by 2030.

In addition to traditional automakers, start-ups like the Chinese company Nio and titans of other industries like Apple are seeking pieces of the burgeoning market.

Automakers in the United States, China, Europe and South Korea are already sprinting past their Japanese competitors. Toyota did not release its first all-electric vehicle on the consumer market until early 2020, and then only in China. Honda is relying on G.M. to produce electric vehicles for the U.S. market.

The rush into electric vehicles has been spurred in part by plans in China, in European nations and elsewhere to either mandate higher sales of electric cars in the coming years or to ban gasoline-burning vehicles. Scientists say the transition away from gas-powered vehicles is crucial to combating climate change and reducing smog.

These moves have created a huge potential market for all-electric vehicles, which investors clearly see as the cars of tomorrow: Tesla is more valuable than the next six automakers combined, despite having only a tiny fraction of their sales.

Yet in Japan, automakers and the government are questioning some of the basic assumptions propelling the electric bandwagon. They are skeptical — at least in the short to medium term — of electric cars’ potential profitability and environmental superiority.

In December, Japan announced that it would stop the sale of new gasoline-only cars by 2035. But the government still views hybrids as an important technology and has no intention of following the lead of places like Britain and California that plan to ban them, an official from the trade ministry said in a recent interview. Japanese regulators say they will release specifics this year.

The resistance to eliminating hybrids has found its most powerful voice in Akio Toyoda, chairman of the Japan Automobile Manufacturers Association and president of Toyota, the world leader in hybrid car sales.

The company sets the tone for the entire Japanese auto industry. It owns Daihatsu and in recent years has entered into partnerships for developing electric vehicles, including hybrids, with three smaller automakers — Subaru, Suzuki and Mazda — a grouping that manufactures more than half of all Japanese cars. It has also heavily promoted cars that run on clean-burning hydrogen, a technology that has yet to catch on in Japan or elsewhere.

During a December news conference in his capacity as head of the automotive association, Mr. Toyoda scoffed at the idea of Japan’s replacing hybrids with all-electric vehicles, accusing the Japanese media of inflating their commercial and environmental viability.

Electric cars, Mr. Toyoda pointed out, are only as clean as the electricity that powers them and the factories where they are built. Japan, Toyota’s second-biggest market, plans to go carbon neutral by 2050, but as long as it continues to rely on fossil fuels to generate electricity, he said, the vehicles’ environmental benefits will remain a mirage.

Japanese automakers are “hanging on by their fingernails,” he added, and if Japan mandated a shift to all-electric vehicles — which have fewer components and are easier to manufacture — it could cost millions of jobs and destroy a whole ecosystem of auto parts suppliers.

Sales of gasoline-electric hybrids are expected to continue growing until 2027, according to a report by IDTechEx, a market research firm. So it is understandable that Japanese firms — and regulators — want to try to recoup the country’s enormous investments in hybrid technology and wait to see how consumer preferences and foreign regulatory regimes evolve, said James Edmondson, an analyst at the firm.

“For the manufacturers like Toyota, like Nissan, the hybrids are so prolific, there’s a good business case for them, so it’s in the interest of the government to keep pushing for them,” he said.

Kota Yuzawa, an auto industry analyst at Goldman Sachs, said it was not a matter of whether Japan’s automakers could make the transition. They have world-class technology and are putting significant resources into developing more of it. “But they are waiting for the right timing,” he said.

“The biggest questions are: Can you make a mass-market vehicle. Can you break even?” he added.

The answer is yes, said Mr. Inoue, the Leaf designer, who now splits his time between running a consulting company and teaching sustainable mobility design at I.A.A.D., a design institute in Italy.

But making the shift from building hybrids to building all-electric vehicles is not easy. The two kinds of cars cannot be manufactured cost effectively on the same platforms, Mr. Inoue said, and “if many companies don’t change now, the efficient production of electric vehicles will become quite difficult in the future.”

With its history of mass-producing electric vehicles, Nissan is arguably the best positioned of Japan’s major automakers to compete in the market for emission-free cars. But the company, by its own admission, has lost its lead and is now scrambling to catch up.

Last summer, it announced its most ambitious battery-electric vehicle since the Leaf, an S.U.V. called the Ariya. And in January, the company said it would be carbon neutral by 2050, a decision that mirrored a new national policy change late last year.

But, like Japan’s other automakers, it is moving cautiously.

“For Nissan’s key markets, every all-new vehicle offering will be electrified by the early 2030s,” the company’s chief sustainability officer, Joji Tagawa, said in an email. But “in other markets, we will gradually switch to electrified vehicles.”

In the meantime, the company will heavily promote its newer hybrid technology, which it calls e-Power: essentially, an electric motor powered by a gas generator.

In Japan, the lack of government enthusiasm for emission-free cars is likely to put its automakers at a serious disadvantage, said Kazuo Yajima, the Leaf’s former lead engineer, who now runs Blue Sky Technology, a company that develops micro-electric vehicles.

China and the European Union have lost the race for hybrid technology, Mr. Yajima said, so their governments have made a strategic decision to invest in the development of electric cars, including key technologies like batteries.

Japanese automakers’ reluctance to make the leap to all-electric vehicles, Mr. Yajima said, could lead them to suffer the same fate as the country’s consumer electronics firms, which have largely faded into irrelevance because of their failure to stay ahead of market trends.

Mr. Inoue agrees. The automotive sector is “the final battlefield” for Japanese industry, he said.

“Now Japan is winning,” he said, “but I think in 10 years if we lose the opportunity to move to the electric vehicles field, we may lose.”