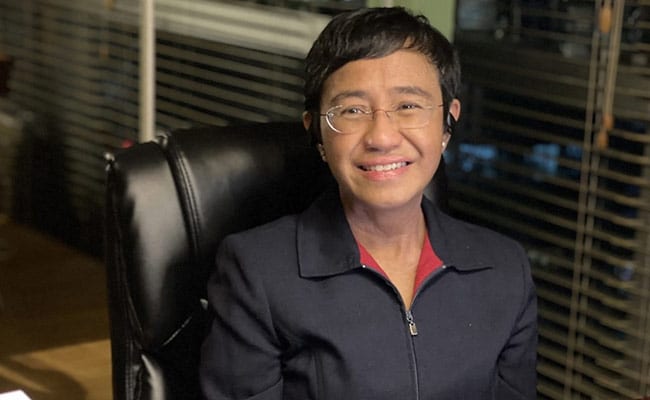 Investigative journalists Maria Ressa of the Philippines and Dmitry Muratov of Russia won the Nobel Peace Prize for their work promoting freedom of expression. Ms Ressa, also a US citizen, is co-founder of Rappler, a digital media company for investigative journalism. Mr Muratov is a co-founder of Russia’s leading independent newspaper Novaya Gazeta. NDTV spoke with Ms Ressa on winning the Nobel Peace Prize and her work.

NDTV: What an exciting day for journalists around the world today. The Nobel Peace Prize for 2021 has been given to journalists Maria Ressa and also to Dmitry Muratov for their work fighting to defend freedom of expression in the Philippines and Russia. But Maria, first, congratulations. Has it sunk in yet?

Maria Ressa: I think it’s just starting to, it has been an insane frantic period that’s gone up and down first unbelievable. And then stunning. And then it makes you just go back. Overall the last few years have been so difficult and now, hopefully, more energy for the future.

Maria Ressa: I think this is something that journalists were embattled like me, like Dmitry, like many in India as well. Right. Women, in particular, have been attacked online in the Philippines at least 10 times more. The way that news organisations have lost our gatekeeping powers to technology platforms which have made facts available has rippled through our society. So I think this is a recognition of the importance of facts in any shared reality to find solutions and facts. With journalists holding that line. This recognizes not only how difficult it has been to continue doing what we used to do, the job of holding power to account, but at the same time, I think will give us more energy to try to crafts the years ahead.

NDTV: Right. And, Maria, just that point you made because we talk about even in India. And of course, at NDTV, we identify with some of that because you only see government agencies go after journalist organizations when you see funding methods being set off. When you see government agencies doing tax raids and you as well were convicted for libel, you faced a jail term, you actually went to jail, got out only on bail. There are so many different ways of attacking people. Media houses, organizations speak truth to power. Nowadays, it’s almost impossible to keep up.

Maria Ressa: Well, the first thing that we’re seeing is really how American social media platforms have been used. Their weaknesses, the algorithms are used to attack the truth-tellers. And once you weaken the facts, then that creates an enabling environment where journalists trying to hold power to account are attacked and attacked in my case with the law. Look, I had the Philippine government file 10 arrest warrants against me in less than two years. I spent more time with lawyers than I did managing Rappler. Here’s the thing. When I was convicted of cyber libel last year, I was convicted for a story in 2012 that I didn’t write, edit or supervise at a time when the law I supposedly violated didn’t even really exist. This is a time where power is consolidating power, where the very platforms that deliver the news, the social media platforms have become behaviour modification systems that actually change the beliefs people have. So in many ways, journalists are on a quick stand. Our credibility is under attack. Trust is under attack. And the very same platforms where we’re being attacked are the ones that are also siphoning away our business model, the advertising dollars. So it’s an existential moment. And I think what the Nobel Committee did is to show that without facts, you can’t have the truth. Without truth, you can’t have trust. If you don’t have any of these things, you can’t have a functioning democracy, much less try to solve the complex problems we’re dealing with today in the world, like the coronavirus, then this information problem, the anti-vax issues, the conspiracy theories that come through or climate change. This is a problem that’s global in scope.

NDTV: In fact and without freedom of expression. I mean, it seems such a simple concept, but really, to award freedom of expression, the fight for it as a fight. There’s a global battle for peace and for democracy, I think, is so important as well. And you, of course, Maria, have taken on the President of the Philippines, not him personally. What he’s been saying, the drugs scandals, issues of corruption, issues of misogyny. Sometimes when you take on the President of a state, especially one who’s often authoritarian or very popular with almost cult-like figures, it’s seen as anti-national. That’s the word very popularly used in India. It’s seen as anti-national. It’s seen as that you’re against the country rather than against a government. How have we come to this stage where you made the point that you know, perhaps at one point, journalists as truth-tellers as holding power to account now are themselves under scrutiny as being enemies of the state are anti-national.

Maria Ressa: I think this is a part of the way we are being attacked, to make our work, to hold power, to account inconsequential. Right. And that’s tearing down, shooting the messenger, if you will. The problem, of course, is it’s also a form of gaslighting in the sense that we come under attack because we’re trying to do our jobs calling us anti-national. President Duterte, for example, in the State of the Nation address, said that Rapper was owned by Americans. That’s not true. And yet when it comes out of the President’s mouth, you expect it to have to be true. This is another problem, right? And again, that connects back to our information ecosystem. When you make facts debatable and instead of being held accountable, power then can just lie we’re in a different world. And that’s, I think, part of what the choices of the Nobel Committee showed is that journalists like us will continue to try to hold the line, to try to hold power, tremendous power to account. Then it has become even more difficult to do that. And with Dmitry, I hope we stand for all of the journalists around the world who are doing our very best to keep power in check.

NDTV: Absolutely. And I think it’s something really doing our best. I mean, journalists are trying their best, extremely challenging circumstances. Your win and Dmitry’s win have given all of us at any TV and many of our counterparts much, much hope. But just tell me, Maria, did you ever think, especially in the last five or six years, when you decided to set up your own investigative journalism website? And when you face death threats and at that point, you made about women journalists? Because I do think the kind of abuse we face is something which is specifically targeted and very, very different to what male journalists often face. Did you ever think it’s time you should do something else?

Maria Ressa: No. And this is the crazy thing. Rappel came under government attack when I’m old. This is my 35th year as a journalist. And so when we came under attack, my co-founders and I, we already knew why we were doing what we were doing. And we understood the mission of journalism. So in the beginning, it was kind of like it was in disbelief that the government would try to do these things, try to file cases against us, try to call us foreign influences. And yet, as we move forward, you have no choice but to continue to challenge these things. And you realize that the mission of journalism is more important today than ever. And as in January 20, when the government tried to shut us down by taking away our licence to operate, we challenged it in court. We continued to operate. And it actually gave our small company or about 100 journalists, 63 per cent young women, 23 years oldest, a median age. So I gave our small company a real mission, it made it come alive. You don’t know who you are until you’re really forced to fight for it. And in that sense, in some ways, I can almost say we know who we are. We’ll continue to hold the line. And now, as we move towards presidential elections in May 2022, it signals the end of six years term of President Duterte. I think we’re at this moment where we must make sure that we keep democracy alive, that we shore up our failing institutions because, in the end, we do get the democracy we deserve.

NDTV: Well, Maria is an inspiration to all of us at NDTV and journalists around the world. The Nobel going to two very, very brave journalists, Maria Ressa and Dmitry Muratov. Thank you so much for joining me on TV tonight. Thank you.

The Nihangs: Sikh Warrior Creed That Evokes Respect And Fear In Equal Measure