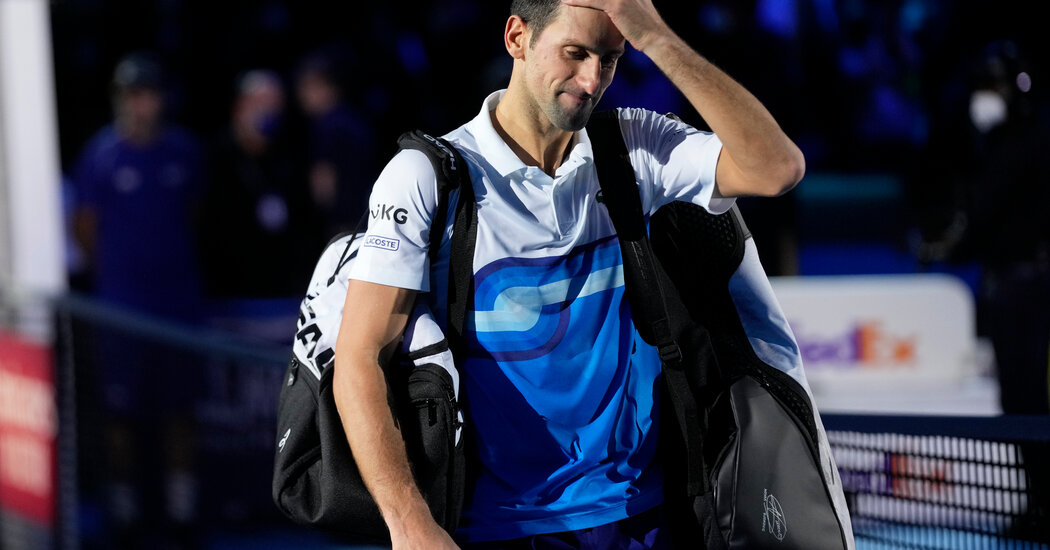 TURIN, Italy — There will be no record-tying sixth victory in the ATP Finals for Novak Djokovic.

Alexander Zverev made sure of that. So did the top-ranked Djokovic’s uncharacteristically shaky play early in the third set, which gave the long-limbed, big-serving Zverev all the elbow room he required to close out his 7-6 (4), 4-6, 6-3 victory in the semifinals on Saturday night.

There was also no clarity on whether Djokovic will try to win a record-extending 10th singles title at the 2022 Australian Open, the first Grand Slam tournament where players will be required to be fully vaccinated against Covid-19. Djokovic, who has declined to divulge his vaccination status, had said that he would make his decision about traveling to Australia once the tournament announced its policy. It became official on Saturday, but he chose to remain noncommittal about the event, which begins on Jan. 17.

“Now that I know, we’ll just have to wait and see,” he said.

Djokovic has had a remarkably successful season, winning three major singles titles and coming within one match of completing the Grand Slam at the U.S. Open. At age 34, once considered an advanced tennis age, he will finish the year at No. 1 for a record seventh time.

But he is also increasingly under threat on hardcourts, be they outdoors or indoors, from the younger and taller set. Zverev and Daniil Medvedev have taken turns thwarting Djokovic’s big plans and tennis dreams in the past four months. It is hardly a great surprise that the second-ranked Medvedev and the third-ranked Zverev will meet in the final on Sunday.

“We’re not that young anymore, 25 and 24, so not that young,” said Zverev, who turned 24 in April. “And we’re starting to break through. He’s a Grand Slam champion, and I’m an Olympic gold medalist, and maybe we both put that on the line tomorrow.”

Both achievements came at Djokovic’s expense. Djokovic has never won an Olympic gold medal, and he was on the brink when he faced Zverev in the semifinals of the Tokyo Games in July. He won the first set 6-1 and went up an early service break in the third. But Djokovic’s level dropped significantly from there.

“It was almost as if he wanted it too much,” Roger Federer, one of Djokovic’s career-long rivals, said in an interview with Sky Italia on Saturday.

Zverev rallied to win the gold medal, the most significant victory of his career.

Djokovic, deflated, did not play again until the U.S. Open, where he won his first six matches, including a five-set thriller against Zverev in the semifinals, to give himself the chance to play for the Grand Slam against Medvedev.

But instead of Djokovic breaking his tie with Federer and Rafael Nadal by winning a 21st Grand Slam singles title, Medvedev became a first-time Grand Slam champion.

Djokovic thinks Zverev, who has yet to beat Djokovic in a best-of-five-set match, is close to joining the club. It was hard to dismiss the notion after watching Zverev rip serves in the clutch and often get the better of Djokovic in grueling, high-velocity baseline rallies.

It was easy to forget amid the bonhomie that Zverev remains under investigation by the men’s tour because of allegations of physical abuse from a former girlfriend Olya Sharypova. She has filed no formal charges but has given a detailed account of the accusations in media interviews. Zverev, who has denied abusing Sharypova, has welcomed the investigation as a chance to clear his name. He has managed to thrive on court despite the controversy.

But the Olympic gold medal has boosted Zverev’s confidence. It is a happy memory he taps into by frequently wearing his German Olympic team warm-up suit before matches.

Both he and Medvedev won the ATP Finals when this elite, itinerant eight-man event was held at the O2 Arena in London: Zverev in 2018 and Medvedev in 2020. Now, they will face each other in Turin, where the tournament has moved for a five-year run with a similar deep-blue color scheme and a rather quicker court.

Both are 6-foot-6 with big wingspans and excellent mobility, which can make them exceedingly difficult to break down. But Medvedev has had the clear edge, winning their last five matches over the past two seasons, including their round-robin match this week by the narrowest of margins, 6-3, 6-7 (3), 7-6 (6).

The speed of the court does not make Medvedev’s huge and elastic serve any easier to handle. But the conditions may help Zverev’s bigger serve even more. Djokovic, the game’s supreme returner, could break him just once on Saturday and even when Djokovic guessed correctly on the location of Zverev’s serves, he was often unable to reach them.

Djokovic also served brilliantly through much of the match, using his precision to hit 15 aces to Zverev’s 14. But at 1-2 in the third set, he played his worst service game, opening with a smooth forehand winner, then making three consecutive forehand unforced errors and eventually losing the edgy game by dumping a backhand into the net.

“Just wasted really the match in that game,” Djokovic said. “Four unforced errors. In the conditions like this where you have one of the biggest servers in the game, it’s just difficult to come back from that.”

The result deepened Djokovic’s drought at the ATP Finals, which he last won in 2015. Though Djokovic has broken or matched some of Federer’s most significant records, including total weeks at No. 1, Federer still holds the record for most victories at the ATP Finals with six.

While Federer, now 40, is sidelined indefinitely because of major knee surgery, Djokovic plays on, although perhaps not in Australia in 2022. He has made it clear that he does not believe vaccination for Covid should be required, and yet the state government of Victoria in Australia has made it mandatory for the Australian Open.

Zverev went out of his way on Saturday to compliment and support Djokovic: “He’s the greatest player of all time, and people forget that sometimes,” Zverev said in his post-match interview. “I think everybody should appreciate that.”

He said he hoped Djokovic would be able to play in Melbourne but acknowledged the obstacles.

“Look, this is a very tough one, because it’s very political,” Zverev said. “This is about the virus that is going on, right? This is not about a tournament or tennis. We are visiting a different country. At the end of the day, the country is allowing us to enter. We need to follow the rules and follow the guidelines.”

Tournament officials have given no indication that any exceptions will be made to the policy, and the Australian Open could be the first of numerous tour events to require vaccination next season.

But even though Djokovic did play in Turin, he is no longer in the running. The trophy will go to one of the two other, younger men who have shined most brightly on court in 2021.

Will SRK shoot for Pathan from December 15?